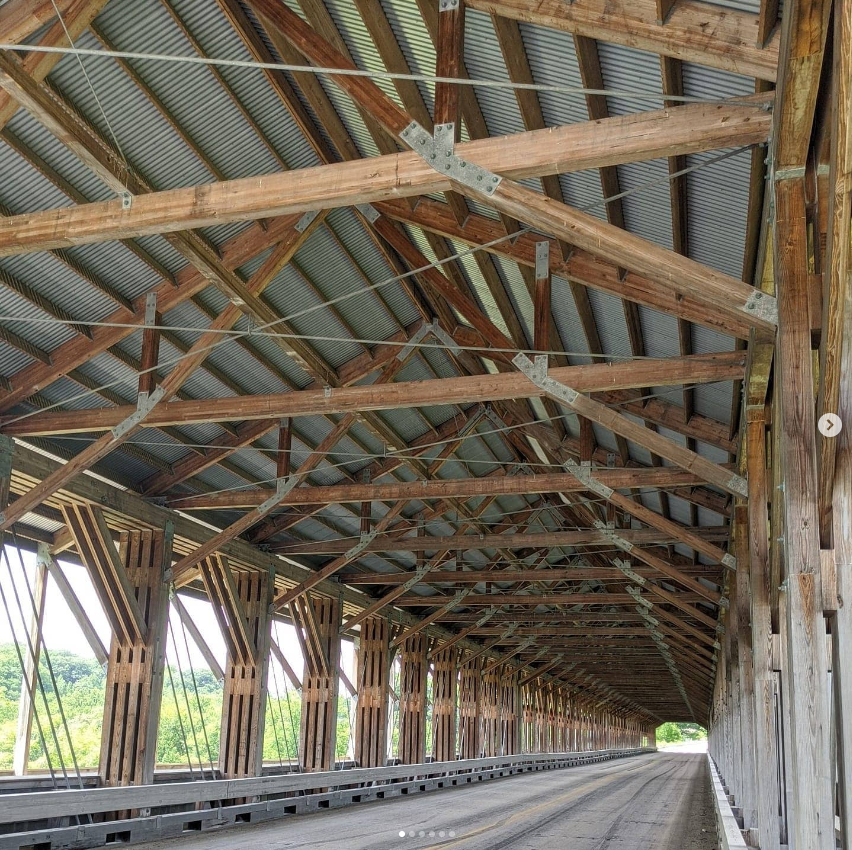 What did bridges look like before steel and reinforced concrete? This #seismicsatueday we feature the Smolen-Gulf Bridge in Ashtabula, Ohio. Measuring 613 ft, the bridge is the longest wooden truss covered bridge in the US.

Popular in the 1800s, a “covered bridge” is a wooden truss bridge with a truss roof. The roof protects the bridge deck from snow, rain, and sun, extending the life of the structure. The Smolen-Gulf bridge was built in 2008 and due to its roof covering, shown in fig. 2, engineers estimate it to have a design life of over 100 years.

The bridge was built in homage to Ashtabula County’s many old covered bridges. The county is known for its covered bridges, and hosts the anual Covered Bridge Festival. It is a dream of this bridge blogger to attend some day!

The Smolen-Gulf bridge is designed as a Pratt Truss (see fig. 3). The top and bottom chords are made by sistering together planks of wood. For examble the bottom, shown in figure 4, uses four 2X planks of southern yellow pine connected together with a steel plate. The diagonals of the bridge are made with three steel rods that stretch diagonally across the frame (fig. 4). These rods are in tension, and slot in between the pieces of wood in the bottom chord, as shown in figure 4. In the 1800s, wood planks would have been used in place of these rods.

The bridge is built in 4 sections, with small gaps in between. These gaps of give the sections space to expand and contract in the extreme temperature variations of Ohio (fig. 6), which can reach 100 degrees F in the Summer and plunge below 0 degrees F in the winter.

The wooden deck is directly paved with asphalt. After 15 years of wear, some asphalt appears to be worn down (fig. 6). It looks to be overdue for a repaving. The pavement may have been initially applied in a thin layer to reduce the weight added onto the structure, meaning that it wore down faster.

The Smolen-Gulf bridge structure hybridizes 20th-century bridge technology, like steel rods and modern reinforced concrete abutments, with 19th-century covered wooden bridge building techniques. The bridge is a wonderful break from conventional modern highway bridges, and is a fantastic homage to the many historic covered bridges of Ashtabula County.